Former member of band charged in assault in NYC

Last night's CBGB Festival show at Webster Hall in New York City was forced to shut down early after a former bassist attacked members of the Cro-Mags in a dressing room, the New York Post reports.
At around 8:15 p.m., Harley Flanagan, a founding member of the band who played bass with them for more than a decade, allegedly forced his way through Webster Hall's VIP section toward the Cro-Mags' dressing room. Upon reaching the dressing room, he stabbed William Berario and Michael Couls with a hunting knife, and bit Berario on the cheek.
Flanagan was eventually subdued by several security guards, and handcuffed to a chair by the police.
"People started booing him and throwing stuff at him," a witness told the Post. "His hands were handcuffed but he still gave everyone the finger."
The two injured musicians were taken to the hospital for their wounds, which were not life-threatening. Flanagan was also taken to the hospital for a broken leg sustained in the effort to subdue him. He was charged with two counts of second degree assault and a weapons charge.
"We are saddened to learn about the events that occurred last night at Webster Hall," the organizers of the CBGB Festival said in a statement. "Our primary concern is always the safety and experience of New Yorkers, music fans and the general public.  Naturally we will fully cooperate with law enforcement while hoping for the speedy recovery of those injured."
Original Post: http://www.rollingstone.com/music/news/former-cro-mags-bassist-accused-of-stabbing-at-new-york-show-20120707#ixzz205wmZqO6 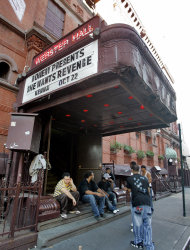 P.S. - Sounds like there was a little tension between band members!
P.S.S. - Harley should of chatted with the ladies of IM Live or click on the picture to the right!
Posted by Unknown at 5:44 PM