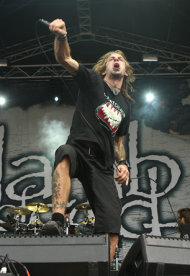 Following frontman Randy Blythe's imprisonment in the Czech Republic over suspicion of manslaughter, Lamb of God have released a statement addressing the situation. The singer has been detained since last week over an incident in which a fan died after a 2010 concert in the country.

The band begins by thanking "everyone who has reached out in support . . . We have been keeping our heads down and not speaking out due to the fluid nature of the situation and the constantly changing information that even we receive daily. Within an hour things can do endless 180's. It's maddening to try and make heads or tails," they write. "We're taking the time to speak to you as it has been a significant period of time since this situation began and while nothing is immediately clear to any of us, we are not trying to keep anyone in the dark.

"We have reached out and are making use of the resources we have acquired to help our brother who is still detained in Czech jail," the band continues. "In the two years since, we were never notified of anything related to this incident."

"Randy is our brother and we assure you, we are all staying very positive for him, working endlessly behind the scenes to provide any and all assistance possible," the statement concludes. "The best we can do is to stay positive and continue to support our friend that we know is innocent. We know that justice will prevail and we will continue to do our part to support our friend."

Blythe was arrested on June 27th on suspicion of manslaughter after an incident on May 24th, 2010, when a fan who repeatedly came onstage was pushed off and eventually died. The band had returned to the Czech Republic on tour in support of their latest album, Resolution. Lamb of God have also set up a legal fund for Blythe.

That whole situation is crazy! My heart goes out to Randy and his Family. Hopefully the situation is resolved in a timely manner.
Posted by Unknown at 7:48 PM